Who is Asher Mir? 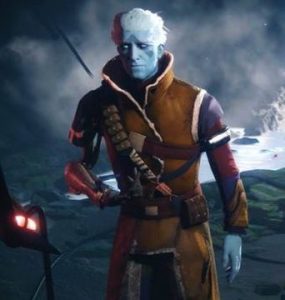 Guardians meet Ikora on the surface of Io, where she asks us to save the planet from the Cabal. During our adventure we encounter Asher Mir, an old Awoken Warlock researcher with Vex technology embedded in his arm. We can earn rank with him through Io Tokens, Phaseglass Needles, and Phaseglass Spires.

Asher Mir was a Warlock, and a researcher. In the past he hired two Hunters to work with him on a mission, and they continued to work together as a fireteam until they explored the Pyramidion on Io. There they met Brakion, Genesis Mind, which captured and experimented on them. The two Hunters did not survive, however Asher survived and escaped with his Ghost. He is stuck with a Vex right arm, and his Ghost is heavily augmented with a Goblin’s unblinking red eye. Asher made his way back to the Last City where he fell into a coma as the Vex machinery attempted to take over. According to the Grimoire card Ghost Fragment: Eris Morn he and Eris Morn are friends, kindred spirits thanks to their ability to irritate the Vanguard and their shared transformations from enemy alien species. She refers to him as Gensym Scribe, but it’s unknown if this is another name for him or some sort of rank.

When we meet Asher Mir, he has what can be described as a prickly personality. He is quite narcissistic and eccentric, often having outbursts while speaking with Guardians during their missions. As a researcher, he values evidence and careful planning over faith and impulsive actions. He’s known for having tantrums, as explained by Ikora during one of our missions with the two. His reply clearly shows his personality in just five words.

“Asher can’t figure out where you are. If he drops out, it’s because he’s thrown a tantrum and broken his microphone.”

“I heard that, you wretch!”

Being a scientist, Asher Mir tends to have long-winded explanations with advanced scientific words and phrases, leaving us in confusion and annoying him as he is forced to simplify what he just said.

With his personality, and often complete disregard for our personal safety, Asher Mir completely fits the definition of mad scientist.