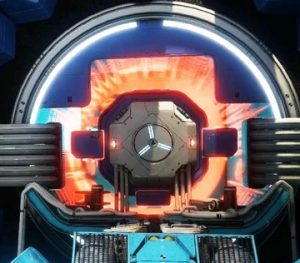 When Guardians arrive on Nessus in search of Cayde-6 they’re greeted by an AI who calls herself Failsafe. Failsafe agrees to help us, and is the quest-giver for Nessus after we assist Cayde-6. She accepts Nessus Tokens, Microphasic Datalattice, and Quantized Datalattice to rank up with her.

Failsafe is the AI of Colony Ship Exodus Black that crashed on Nessus, and from what we know her entire crew has perished either during the crash or after. After we prove ourselves to her, she takes us in as her new crew and refers to Guardians as her Captain.

Failsafe has quite the unique personality, normally being chipper and happy to help, and then suddenly turning into an apathetic psychopath who just doesn’t seem to care about anyone.

“(Apathetic voice) Everyone I’ve ever known is dead, and their bones are dust. (Cheerful voice) I am very lonely.”

We can assume this is all due to a glitch in her system after crashing on Nessus.

Failsafe seems to have empathy for creatures that are trapped or stuck against their will, and has even gone so far as to ask us to free Fallen that have been captured by the Vex. Our Ghost warns her that the Fallen won’t show any gratitude, but she insists that we help them anyway.

However, Failsafe does not like Cayde-6, blaming him for showing the Fallen and Vex that she existed. As a result, she tends to mock his intelligence.

Failsafe helps us during several missions, on and off Nessus, by communicating through our comms.

An interesting theory that Failsafe and her ship were transporting Siva is explained by Myelin Games in his Destiny 2 Lore videos. He theorizes that Failsafe is the AI from the Grimoire card Ghost Fragment: Old Russia 4, and her ship was transporting Siva when she crashed. He pieces this together with clues from other cards mentioning that colony ship AIs refer to Rasputin as the Tyrant, the fact that Siva is present during a Nightfall Strike, and other clues mentioned in his video.