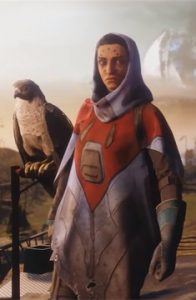 After the loss of our Light, Guardians travel outside of the City walls to find a way to survive. As we travel, we begin to follow a hawk. It guides us through the mountains, until we finally stumble upon Suraya Hawthorne, a human with a circle of dots on her face. She explains that the hawk is her companion, Louis, and the best pilot in her crew. She takes us in with the rest of the survivors that she has found, giving us a weapon and providing us with somewhere to stay while we survive.

Hawthorne is a regular human who has been surviving in the wild since she was a teenager, preferring the freedom compared to the “prison” of the City walls. She left to find her own purpose and, once the Red Legion invaded, she found it in leading survivors to safety and helping them improve their lives.

According some of the dialogue between her and Devrim Kay, she was a bit of a trouble-maker and had to be bailed out several times before she left the Last City. While she does not like the confines of the City, she does respect what it stands for and the Guardians who protect it. Exploring the courtyard of the Tower, our Ghost will find some supplies to scan. Scanning these supplies suggests that Hawthorne had people stealing supplies from the Faction vendors, or at least had people believing it was the right thing to do.

She appreciates us helping at the Farm and in the European Dead Zone, but ends up angry and frustrated when we talk about leaving to find Commander Zavala on Titan. Hawthorne feels that it’s more important to protect the people she has there rather than try to start a fight that nobody believes we can win.

Hawthorne is a gifted sniper, proving her abilities and prompting Cayde-6 to ask if she’s actually one of the Hunters under his command.

“Are you sure you’re not one of my Hunters?”

“Not really into capes.”

Hawthorne doesn’t approve of trying to retake the City, feeling it’s better to just survive on the Farm than risk lives, but still assists the Vanguard. She eventually earns the title of Guardian from Commander Zavala after she saves his life. This is truly an honor for someone who has never been a Guardian.