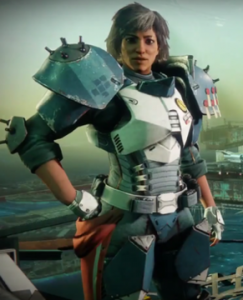 When we travel to Titan we encounter Commander Zavala, but there’s also a new NCP: Deputy Commander Sloane. She was first introduced in the official Destiny 2 launch trailer posted on their Instagram, where we see her name in the subtitles saying “The war is over. And we have lost”.

We meet Deputy Commander Sloane through the intercoms as we announce our arrival to Commander Zavala and report that we have regained our Light. While Zavala is skeptical and does not want to risk losing another “Lightless Guardian” Sloane has faith in us, and asks us to help regain Titan so we can start planning a counterattack against the Cabal. She continues to work with us during our adventures on Titan, and is the vendor to turn Arcology Tokens, Alkane Dust, and Alkane Spores in to.

Deputy Commander Sloane is a female Guardian under the command of Commander Zavala. She was first introduced within the Age of Triumph grimoire cards. In the card Ghost Fragment: Fallen 6 there is a report from Sloane to Commander Zavala about the Fallen.

In this card, Sloane reports that there is something wrong with the Fallen. She says “The Fallen are abandoning the Cosmodrome”. Sloane goes on to report that between fly-overs and independent Fireteams they have not found any Fallen, and only discovered remains of their banners that have been ceremoniously burned.

From this card we can assume that Sloane is in charge of the three scout teams she mentions – A, J, and T – and that she is an extremely skilled leader to be in charge of three teams at once. She goes on to say that she is coordinating with the Queen’s Wrath, Felwinter Peak, and the Warlock Orders to follow up on the reports. This further proves that she has a large amount of responsibility that goes with her leadership skills.